Captain Neil Boyd Mc Eacharn was born on October 28,1884 in Garlieston from a well-off Scottish family, who owned a big shipping company, rich iron- and coal- mines and large estates in Australia. 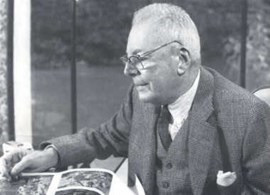 He came in Italy for the first time at the age of eight. It was a meeting with a land that marked the course of his life.

While he finished his studies at Eton and Oxford, as it was required by a young man of his social standing, destined to become a Royal Archer, his main interest, botany, began to stand out.

In 1928 he began his research in Italy for lands that were fit for the realization of a wide and wonderful garden. In 1930, in consequence of an advertisement which appeared on the “Times”, he bought the estate called “La Crocetta” from the Marquise of Sant’Elia, which extended on the Promontory of the Castagnola in Pallanza. Quite soon he began to transform its aspect, with earth- and building-works. The most delicate work was the botanical repopulating of the gardens. So seeds and plants of the five continents were found and bought and the cultivation of numberless plants was started.

In 1939 the Captain, who had to leave Italy during the period of the Second World War, presented his garden to the Italian State with the condition that it should remain private. He entrusted his precious estate to his friend and administrator, the lawyer Cappelletto and reluctantly sailed for Australia. At the end of the war the Captain came back in Pallanza and soon afterwards was requested by his friends and authorities to open the gates to the public.

On April 18, 1964 he died on the veranda with a view on his beloved garden. Some months before, on July 27, 1963, the town of Pallanza had bestowed him with the freedom of the city.